Skip to content
Coal In The Press The Australian 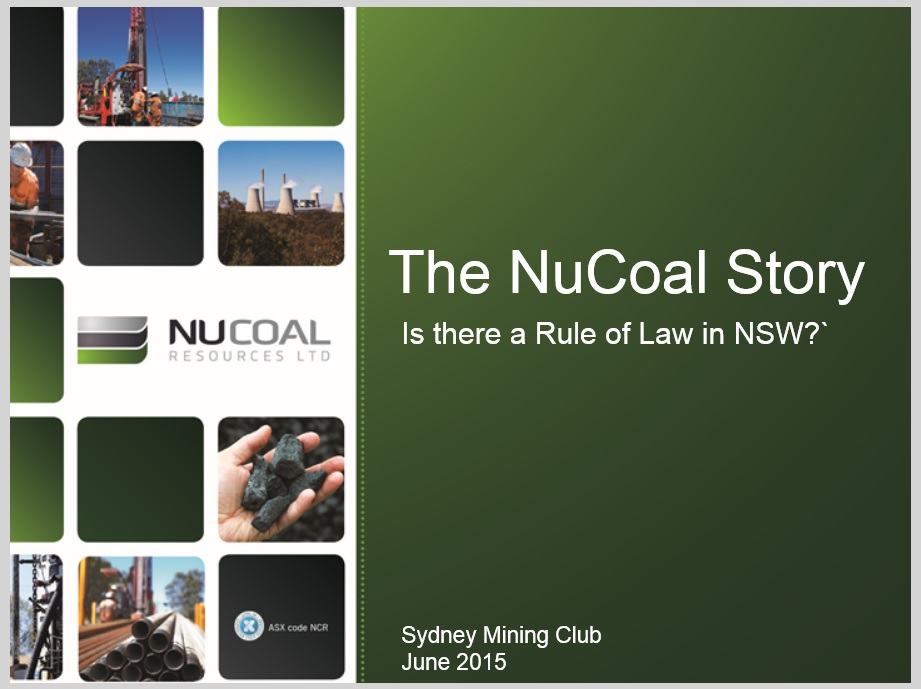 The US institutions, which had major shareholdings in listed mining company NuCoal Resources, were among the main losers last year when the O’Farrell government cancelled the company’s coal exploration licence and refused to pay compensation.

They have instructed international litigation firm Quinn Emanuel Urquhart & Sullivan to help them persuade Australia to pay compensation for the seized ­assets.

While the expropriation was undertaken by NSW, a formal trade dispute over the seizure of US assets could embarrass the federal government and highlight weaknesses in Australia’s legal protection of private property.

As a party to the Australia-US free-trade agreement, the federal government would be forced to choose between defending the expropriation of US assets or encouraging NSW to reverse its policy and compensate the Americans.

NuCoal managing director Glen Lewis said the total value of the cancelled licence was between $300m-$400m, and the value of the stake owned by US interests was about $120m.

“This is not a small number,” he said. “This is why it should get the attention of the US. It is a serious amount of money that has been taken from them,” Mr Lewis said.

That value is based on a joint venture, now abandoned, that NuCoal had negotiated with Mitsui Matsushima and which had been approved by the Foreign Investment Review Board. Mitsui was to have bought in to the project with a “farm-in” of $40m in project development that valued the entire project at $360m.

Mr Lewis said that when his company instructed Quinn Emanuel in Sydney one of the first avenues of recovery the firm focused on was international arbitration under the free-trade agreement.

Sydney partners Michael Mills and Michelle Fox brought in Washington-based David Orta, who is one of the Quinn Emanuel’s leading international arbitration practitioners.

After reviewing NuCoal’s case, Mr Orta said he had not “seen such a clear breach of a free-trade agreement since some of the early free-trade disputes coming out of Latin America 20 years ago”.

Article 11.7 of the US-Australia free-trade agreement bans expropriation of US assets in Australia unless it is done in accordance with “due process of law” and is carried out for a public purpose in a non-discriminatory manner.

The treaty also requires the payment of “prompt, adequate and effective compensation”.

The O’Farrell government cancelled NuCoal’s exploration licence with special legislation in January last year based on a recommendation from the Independent Commission Against Corruption — an arm of the executive branch of government.

The licence had originally been issued by former Labor mining minister Ian Macdonald to Doyles Creek Mining, a company then chaired by former union official John Maitland. ICAC told the O’Farrell government the process of issuing the licence had been tainted by corruption and the government accepted the recommendation that it should be cancelled.

But it did not accept ICAC’s proposal that parliament should consider compensating innocent parties adversely affected.

ICAC found that NuCoal was innocent of any wrongdoing and that finding was affirmed last week by the NSW Supreme Court in judicial review proceedings.

That finding follows Mr O’Farrell’s decision in March to issue a public apology to Mr Lewis and other NuCoal directors after he said ICAC had made “adverse comments” about them.

Based on Mr Orta’s advice, the US investors have encouraged NuCoal and Quinn Emanuel to take all possible steps to bring about an international arbitration with the federal government. If the case goes ahead, it would highlight the fact that state governments are not bound by the federal constitutional requirement to pay compensation in just terms for expropriated property.

This is the second time that the federal government has become embroiled in international commercial disputes because the NSW government accepted ICAC’s call to expropriate property.

Japanese investors, led by Nippon Gas, complained to the federal government last year after the O’Farrell government cancelled another coal exploration licence that had been issued in similar circumstances.

Nippon Gas had invested $40m in that licence holder, Cascade Coal, two years after the corrupt conduct that was later identified by ICAC.

Nippon Gas chief executive Shinji Wada wrote in June this year to Mike Baird, Mr O’Farrell’s successor, stating that his company’s experience in being stripped of millions of dollars in assets, denied compensation and prevented from suing in court meant there was clearly “sovereign risk in the state of NSW of which all future investors should be fully alerted”.

As well as cancelling the exploration licences, the NSW government also granted itself and its officers immunity from liability and required NuCoal and Cascade to give the government all their exploration data.

In October, 2013, one of NuCoal’s German institutional investors wrote to Mr O’Farrell asking his government to protect the interests of “truly innocent shareholders of a public company like NuCoal”.

“The future of NSW’s and Australia’s reputation as an investment destination is at stake here,” wrote Josef Heimann, who is managing director of Crocodile Capital Fund, which held 3 per cent of NuCoal’s capital. Crocodile Capital is the portfolio manager for an investment fund with global investments which is mostly funded by the retirement savings of German entrepreneurs.

NuCoal’s Mr Lewis said he was optimistic that his company’s US investors would have an opportunity to have their case heard before the International Court of Arbitration.

“We believe it is a clear-cut case. There is an asset. It has been expropriated and we now have a (NSW) Supreme Court saying the people who had it taken from them are innocent,” he said.

“We think it is a clear-cut matter. We just need to get it into an international court of arbitration.”

Even if international arbitration proves successful, Mr Lewis said it would only help the company’s US shareholders and other forms of redress were needed for Australian shareholders.